Set for Solstice.Today’s summer solstice, the longest day of the year…How are you taking advantage of the extra hours of light at this time of year?

Well, here in Australia it’s the winter solstice and because of the time difference it was actually yesterday. So while you may choose to write about sunshine and long days and watermelon and going to the beach, I shall write about sitting by the fire, and mulled wine and books and slow cooked casseroles… 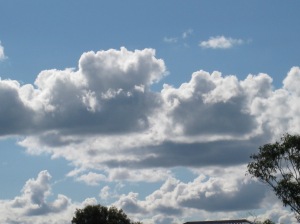 We have pretty skies

But no, I won’t write about such things because I’m sitting on my front porch, wearing a short sleeved tee-shirt and the cat’s asleep in the sun. It’s a warm, sunny day with yet another pretty skyscape; people are walking their dogs and a family just went by on their way to the park. There are still tomatoes ripening on the bush- it’s supposed to be winter! Does this mean the cold will come later? Even though it doesn’t feel like midwinter, yesterday was our shortest day, with only nine hours of sunlight.

Around both winter and summer solstices I find myself wishing for traditions and rituals to mark the turnings of the year. I’ve grown up with a British sensibility; my ancestors who first settled here were  from Britain. At school I studied British and European history and read mostly British literature. I’m a transplant. So I want to celebrate Beltane in May, have bonfires for Midsummer and a Yule log at Christmas.

We haven’t worked out how to replace these old traditions. There are still Christmas cards with snow, robin redbreasts, holly, Santa Claus and reindeers. The attempt to put Santa on a surfboard or replace his reindeer with kangaroos doesn’t seem to work. But we still have traditional Christmas dinners even though it may be a heatwave.

The question of how to create meaningful rituals and celebrations is something I ponder. Here in this new home which I share with a friend we will attempt to create moments of community for the times that matter. Perhaps those moments will include telling stories of special times and sharing our memories. After all, much of our history has come through the stories we have shared.

Five minutes from my house- black and white cows!

My favourite winter memory is  from my early childhood. I would have been, maybe four, and we were living with my grandparents on their farm. I would jump out of bed early and run across to my uncle,who was doing the morning milking. Barefoot, I used to dance across the grass, sparkling with frost still on it, my breath misting out. The dairy was filled with the big, black and white cows, swishing their tails as they waited to be milked. I would put my finger under the milk coming down the separator and lick it- warm and sweet, straight from the cow. The clang of the buckets, the sound of the machines, the stamping of the cows, the smells of the dairy…I wasn’t cold, I was filled with the joy of the fullness of the morning.

It was a moment when “God’s in His Heaven, all’s right with the world.”

This memory will be my Winter Solstice celebration for this year.

5 thoughts on “Set for Solstice”